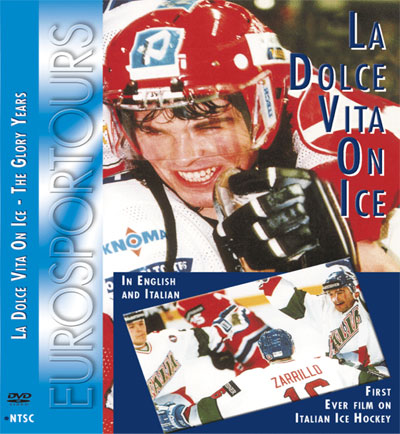 Residing in Italy in 1981 as a Professional hockey player, Brad Doshan had the idea to write and produce a documentary about Italian Ice Hockey, illustrating to his family and friends what life was like in the land of "La Dolce Vita."

This documentary about Italian ice hockey became a reality in 1996 when Brad persuaded major television networks in Italy to contribute hockey footage, studio time, technicians and expertise in order to fulfill his dream of making a film about the greatest game in the world; Italian style.

When the project commenced early in 1994, there were 10,000 fans in the Milan and Bolzanovenues witnessing one of the most spectacular Italian Hockey Final Series ever.

Italy then hosted the 1994 World Ice Hockey Championships in Milan and with the help of many 'Italo' North Americans, the Italian National Team finished sixth behind all the great hockey powers  Canada, Sweden, USA, Russia, and Finland.

Hockey momentum increased with the NHL 'lock-out' season allowing prolific NHL players like Jaromir Jagr, to play in Italy. After seventy- two years of organized hockey, Italy had made its mark on the international scene.

"La Dolce Vita On Ice" will endure as having captured the true essence of this great sport "Italian style" at its pinnacle.

By successfully hosting the 2006 Olympics in Torino showcasing world class teams and players, hopefully Italy will be inspired to further develop the greatest game on earth.

Eurosportours is re-launching "La Dolce Vita on Ice" in order to educate upcoming players, coaches, and fans around the world how the amazing game of ice hockey can succeed in any country.

With live footage dating back to 1922 until 1996, the film is now becoming a hockey cult classic in Italy.

If you are interested in purchasing a copy the only historical documentary ever made on Italian Ice Hockey "La Dolce Vita On Ice," please contact Brad Doshan at Eurosportours@yahoo.com.

Reach Out To Us : We'll walk you through the booking.

Email or call for a free quote on your team’s "Ultimate Road Trip!" Email: Eurosportours@yahoo.com, Phone: (612) 419-9615, or if you prefer, fill in the boxes below and a Eurosportours representative will get back with you. Thank you!